The latest in exciting Facebook giveaways has come from popular accommodation provider Stadium Motel in Hamilton. 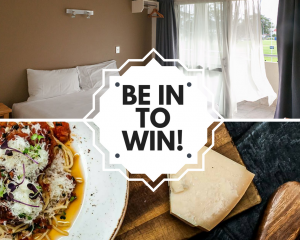 The motel, which is centrally located in Willoughby St, has started a Facebook giveaway for one lucky couple. The prize on offer is a $100 Lawrenson Group voucher and a night in a spa bath studio courtesy of the Hamilton-based accommodation provider.

â€œThe Lawrenson Group run several high-quality restaurants which make for a great night out. After going out for a meal, couples can then come back and relax in one of our comforting spa bath studiosâ€ says Stadium Motelâ€™s owner Brian Stokes.

Spa bath studios offer the ultimate in relaxation. The rooms are newly fitted with a 43-inch Smart TV which allows you access to popular online platforms such as Netflix and YouTube.

Stadium Motel offers FREE WiFi and Sky Television in every room, so whether occupants are sports fans or avid movie watchers the night is made!

The Lawrenson Group voucher is available to be used at any of the restaurants run by the group. These include Victoria Street Bistro, the Roaming Giant, Keystone, House on Hood, Furnace, the Bank Bar and Brasserie and Bluestone Steakhouse.

The competition runs on Facebook via the Stadium Motel page (https://www.facebook.com/StadiumMotelHamilton/), and the winner is drawn after the contest is completed on April 25. All participants have to do to enter is like the Stadium Motel page, tag a friend in the comments section of the competition post and share the post itself. It is a simple way for a couple to have their own night out thanks to Stadium Motel. The voucher and nightâ€™s accommodation must be used by the end of May and is not available on nights that the Chiefs play at FMG Stadium Waikato or for the Warriors game on May 19 at the same ground.

The Stadium Motel team invite travelers in the Waikato and Hamilton region to enjoy the peaceful location of the accommodation provided. The ambient nature of the motel means that there is always a relaxing setting in the motel whatever the occasion. For the best prices available book via the Stadium Motel Facebook page or the Stadium Motel website: www.stadiummotel.co.nz

We enjoyed our stay at ‘Stadium’ First class motel – clean, warm, quiet location. Friendly helpful hosts. Will definitely recommend you to others.